These really are the best people and you can’t judge because you obviously don’t have standards.

Someone tell me how Yahwallahan morality doesn’t come down to “because I said so” and “might makes right”.

Yet another lovely Yahwallahan getting off on their torture fantasy.

For those who claim there is no God, you better pray hard that you are right because if you are wrong, you will have hell to pay for it.

You guessed it, another Yahwallahan wants people who won’t buy his guff dead:

Can you guess what this Yahwallahan wants? Hint: It’s not kittens.

All you atheists are so smart until you're on your deathbed.

“Man I wish he died” is the most Sophisticated Theology ™ around

Another day, another high profile Yahwallahan trying to push their death fetish…now 20% off!

@RichardDawkins Sincere condolences Professor on the loss of your mother. I lost both parents. I hope her passing makes u think about yours & about the wonderful claims of the gospel. Perhaps u could watch “The Fool—Ray Comfort DEVASTATED when RICHARD DAWKINS said THIS!” on YT.

“Might makes right!” is the morality all Yahwallahans can aspire to.

God has absolute rights over his creation and can do with it as he pleases, and he's always right. Atheists think they're God, which is why they use him to justify their wickedness.

“WHY WON’T ATHEIST-SENPAI EVER NOTICE ME! i’ll kill him forever for what he did”

Ron Reagan Jr’s New Ad Will Make Your SKIN CRAWL And They Played It Duri… https://t.co/lYl9w14weE via @YouTube #RonReaganJr #atheist will #burn in hell #breakingnew B careful what you say #power of #life & #death in the tongue

Oh would you look at that another violent Yahwallahan.

Look at that, it’s more sadism.

The joke will be on you then. You will know when you die and wake up to the smell of your flesh burning, for the next million years…

Please, they don’t need to wait on that word to come from on high.

Aaand there we go. pic.twitter.com/JeSov3NeHL

Christian woman claiming California's fires are god's punishment. What does she mean by "sanitize"? What hateful thinking. And, of course, if only the heathens were believers, this wouldn't be happening. I've never understood how these people think. @C_Stroop #EmptyThePews pic.twitter.com/u67zWXawZH

How soon until this guy gets caught with the local pool boy? 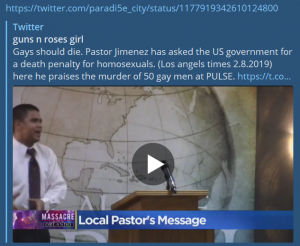 Victim of the angry religion of calling atheism a religion admits that cult relies on the failed tactic of spouting nonsense and claiming it’s “enlightenment”.

The reasonable would see it as an opportunity for enlightenment.

The #atheist sees it as inconvenient.

Atheists do not exist. They know, deep in their hearts, that God exists. —@BurkParsons #ligcon pic.twitter.com/BbFLcdNGOV

Member of the Religion of Peace™ wants you dead.’

Atheists are going to regret disbelieving in Allah once they die.